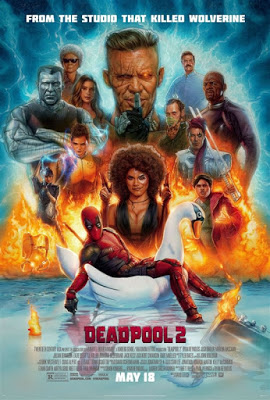 The merc with the mouth returns to the big screen in Deadpool 2. Following the loss of his love Vanessa (Morena Baccarin), Wade Wilson, aka Deadpool (Ryan Reynolds), fall into a suicidal funk, until he is brought on by Colossus (Stefan Kapicic) as a trainee member of the X-Men. On his first mission, he encounters troubled teenage mutant Russell (Julian Dennison) terrorizing an orphanage. Deadpool’s vigilante actions land both himself and Russell in jail, where they encounter the time travelling soldier Cable (Josh Brolin), who is on a mission to eliminate Russell. Along with fellow mutants, such as Domino (Zazie Beetz), Deadpool forms his own team called the X-Force to put a stop to Cable.

Back in 2016, Ryan Reynolds finally satisfied his dream of playing the wisecracking anti-hero Deadpool, which he seems like he was born to play. The film’s large surprise success guaranteed a sequel destined to make things bigger and better. However, as a result of creative differences with Ryan Reynolds, the original film’s director Tim Miller left Deadpool 2 in pre-production, being replaced David Lietch (John Wick, Atomic Blonde).

Deadpool proved that there was room for a superhero film that wasn’t afraid to feature raunchy comedy and violence. Indeed it is Ryan Reynold’s fourth wall breaking performance that gives the film its charm. However, there is something a little off about the sequel, which often featured more dark and serious moments than the previous film.

Deadpool 2 seems to be building up an expanded X-Men universe, with the primary focus being the formation of the X-Force team. This introducing Deadpool’s “frenemy” Cable, who initial seems to be the antagonist of the film, but turns out to have a much deeper character than he appears to be.

I can’t deny that Deadpool 2 is a very entertaining film at times. However, I have to admit that the whole Deadpool schitch is starting to wear a little film. All the best stuff is already given away in the trailers, which are often much more entertaining than the film itself.

While, I have grown to be a big fan of Deadpool over the years, I am not sure what these films want to be as a franchise. Is the film supposed to spoof the cliches of superhero films, while still following them? No amount of wisecracking can make up for the fact that the plot of Deadpool 2 is very much on the generic side.

No matter, how entertaining a character Deadpool can be, even he is not fully immune for sequelitis (despite one hell of a credits scene).