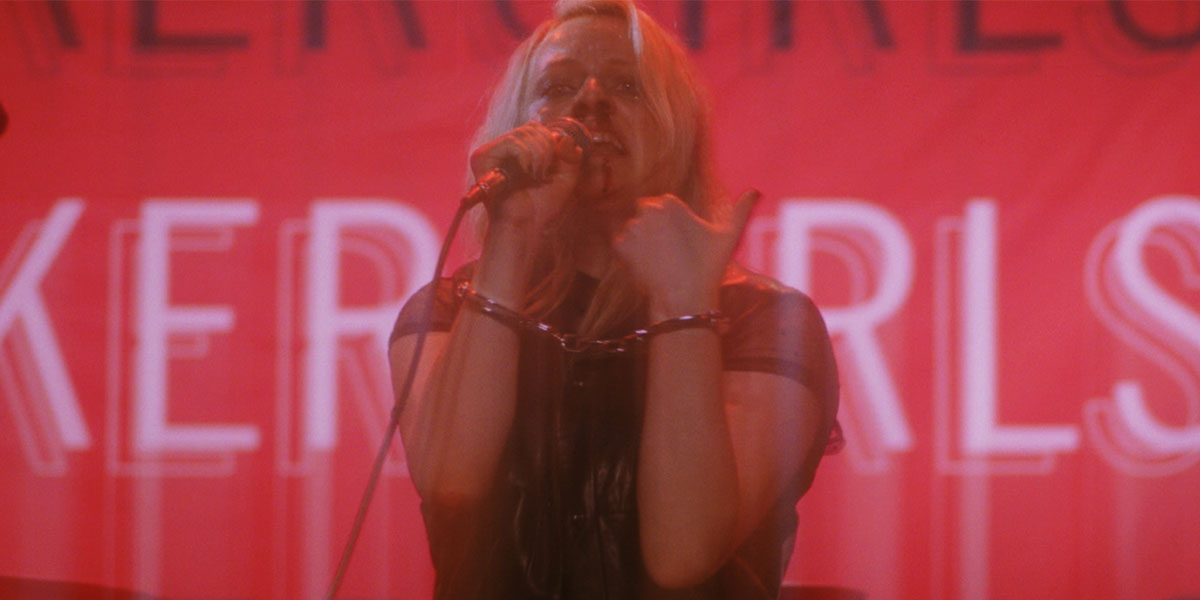 6.0
Her Smell (2018) 2h 14min | Drama, Music | 12 April 2019 (USA)
Director: Alex Ross PerryWriters: Alex Ross PerryStars: Elisabeth Moss, Cara Delevingne, Dan Stevens
Summary: A self-destructive punk rocker struggles with sobriety while trying to recapture the creative inspiration that led her band to success.
Countries: USALanguages: English
Source: imdb.comDisclaimer: This plugin has been coded to automatically quote data from imdb.com. Not available for any other purpose. All showing data have a link to imdb.com. The user is responsible for any other use or change codes.

The future of a once-successful all-female punk band is threatened by the self-destructive behaviour of its lead singer in Her Smell. Becky Something (Elisabeth Moss) is the lead singer and guitarist of the punk rock band Something She, along with bassist Marielle Hell (Agyness Deyn) and drummer Ali van der Wolff (Gayle Rankin). While at one time a chart-topping success, the band is slowly starting to implode, as a result of Becky’s self-destructive drunken behaviour, which results in clashes with her ex-husband Danny (Dan Stevens), record producer Howard (Eric Stoltz), mother Ania (Virginia Madsen), and rival musician Zelda E. Zekiel (Amber Heard).

The latest film from writer/director Alex Ross Petty (Queen of Earth) stars frequent collaborator Elizabeth Moss as the self-destructive front-woman of a 1990s rock band. Using a format similar to 2015’s Steve Jobs, Her Smell consists of five extended sequences, each depicting a different chapter of Something She’s implosion. This includes the aftermath of what could possibly be the band’s final concert, a disastrous recording session, and the moment when Becky Something finally hits rock bottom.

Even though the band at the centre of Her Smell is fictional, it is hard not to notice the similarities between Becky Something and Courtney Love, whose band Hole broke up roughly around the late-1990s time frame the film takes place. The film is bolstered by an excellent lead performance by Elizabeth Moss, who demonstrates how great she is at playing a quite unhinged character, while also demonstrating some pretty impressive singing abilities. Each of the film’s chapters, along with home video interludes, has Moss playing Becky Something in a slightly different manner, demonstrating that she is more than simply a washed up train-wreck.

My only real complaint about Her Smell is that the film runs a bit too long at a running time of 2h15m. Part of this comes from Alex Ross Petty’s decision to include a bit of a redemption arc for Becky Something in the second half of the film. As such, the final two chapters of the film are not as compelling to watch as the first three and they include some unnecessary filler, such as a moment of Becky playing the entirety of Bryan Adams’ “Heaven” on piano. While Her Smell does end off on a relatively satisfying note, I do have to contend that a few of the latter chapters could have been trimmed or omitted completely. That all said, Her Smell is still a film that is worth checking out.

Her Smell is now playing at the TIFF Bell Lightbox