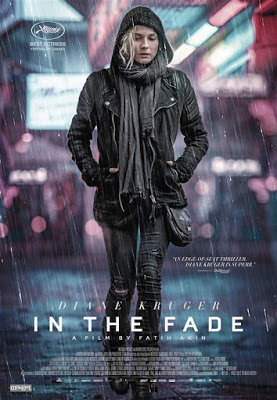 A grief-stricken woman seeks justice for the death of her family in In the Fade. Katja Sekerci (Diane Kruger) is a woman living in Hamburg, married to Turkish ex-con Nuri (Numan Acar). Katja’s world falls apart when a bomb blast kills Nuri and their 5 year old son Rocco. Dealing with prejudice about her husband’s drug dealing past, Katja falls into drug use an depression. Things start to look up when neo-Nazi spouses André (Ulrich Brandhoff) and Edda Möller (Hanna Hilsdorf) are arrested for the crime. However, it turns out that justice isn’t an easy thing to acquire.

With In the Fade, director Fatih Akin makes a commentary on the rise of neo-Nazi groups in Germany, who target foreigners, solely because of their non-German ethnicity. The film is told in three chapters, which each tells a different aspect the story. The first chapter The Family is the most dramatic of the three and deals with Katja’s world falling apart after the death of her family and the judgement placed on her husband by both the police and Katja’s family. In the second chapter Justice, the story transitions into a legal thriller, as the accused are placed on trial for the crime, with Katja’s lawyer friend Danilo (Denis Moschitto) facing off against a defense headed by the somewhat slimy Haberbeck (Johannes Krisch). Finally, the concluding chapter The Sea sees Katja traveling to Greece, ready to take matters into her own hands.

Even though In the Fade is apparently influenced by neo-Nazi groups that arose in Germany a decade ago, In the Fade turns out to be a quite topical film, as we live in a world where xenophobia is making a major resurgence. It is probably even more poignant that there is a film commenting on neo-Nazis that was made in Germany, where Nazism originated from. Breaking from stereotype, a non-white Kurdish man is made the victim in this film, with a white supremacist couple being the villains.

However, throughout her entire ordeal, Katja has to deal with assumptions about her husband, whether it be by the police, her mother, or the defense lawyer during the trial. In fact, the trial sequences in In the Fade are probably the hardest to watch, since even though it’s practically undeniable that the neo-Nazi couple are guilty of the crime, there is still the benefit of the doubt, likely because of the fact they are white. It doesn’t help matters that the fact that Katja fell into drug use following the death of her family resulted in doubts about her reliability.

In the Fade is a very excellent and affecting film that can be viewed as commentary on the increasingly xenophobic world that we are living in. However, it is far from a pleasant viewing experience and you’ll probably be needing a hug afterwards.