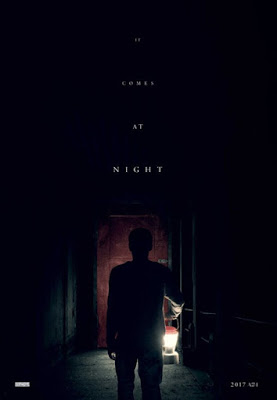 Paranoia develops between two families seeking shelter in a post-apocalyptic world in It Comes at Night. With a insidious viral outbreak infecting the outside world, Paul (Joel Edgerton) lives by a strict routine to survive along with his wife Sarah (Carmen Ejogo) and son Travis (Kelvin Harrison Jr.). One night, a name named Will (Christopher Abbott) is caught trying to break into the house. Despite initial suspicions, Paul agrees to provide shelter for Will, along with his wife Kim (Riley Keough) and son Andrew (Griffin Robert Faulkner). However, a seed of distrust remains, which soon grows into full on paranoia.

Probably the best description of It Comes at Night is that the film is a survivalist drama with some elements of horror. With the exception of the film’s opening scene, which involves Paul euthanizing his father-in-law, the remains pretty coy what exactly the infection plaguing the world entails. However, ultimately the outbreak turns out to be little more than a macguffin, since the film ultimately becomes more about the distrust and paranoia that develops between these two families.

Even though Joel Edgerton’s Paul receives top billing in the film, it can be argued that the true protagonist of It Comes at Night is Kelvin Harrison Jr. as Paul and Sarah’s teenage son Travis. Travis is repeatedly plagued by nightmares, the content of which provides most of the horror in the film. In many ways Travis is the catalyst for the paranoia that develops, even though he is also probably the most pacifist among his family members.

I went into It Comes at Night pretty blind, since I didn’t watch any of the trailers beforehand. However, it is quite obvious that the film is being marketed as a horror film, which is not incorrect, but also somewhat misleading. For the most part, It Comes at Night is a somewhat slow paced drama, which builds up the tension between the two families over time. While some may like the slow burn of the film, others may find It Comes at Night to be somewhat boring. Personally, I would say that I am somewhere in between. While I did lament how slow the film was, the story did keep my interest for the most part.

Ultimately, I would say that It Comes at Night is an interesting tale of post-apocalyptic paranoia, but at the end of the day it’s nothing really special.