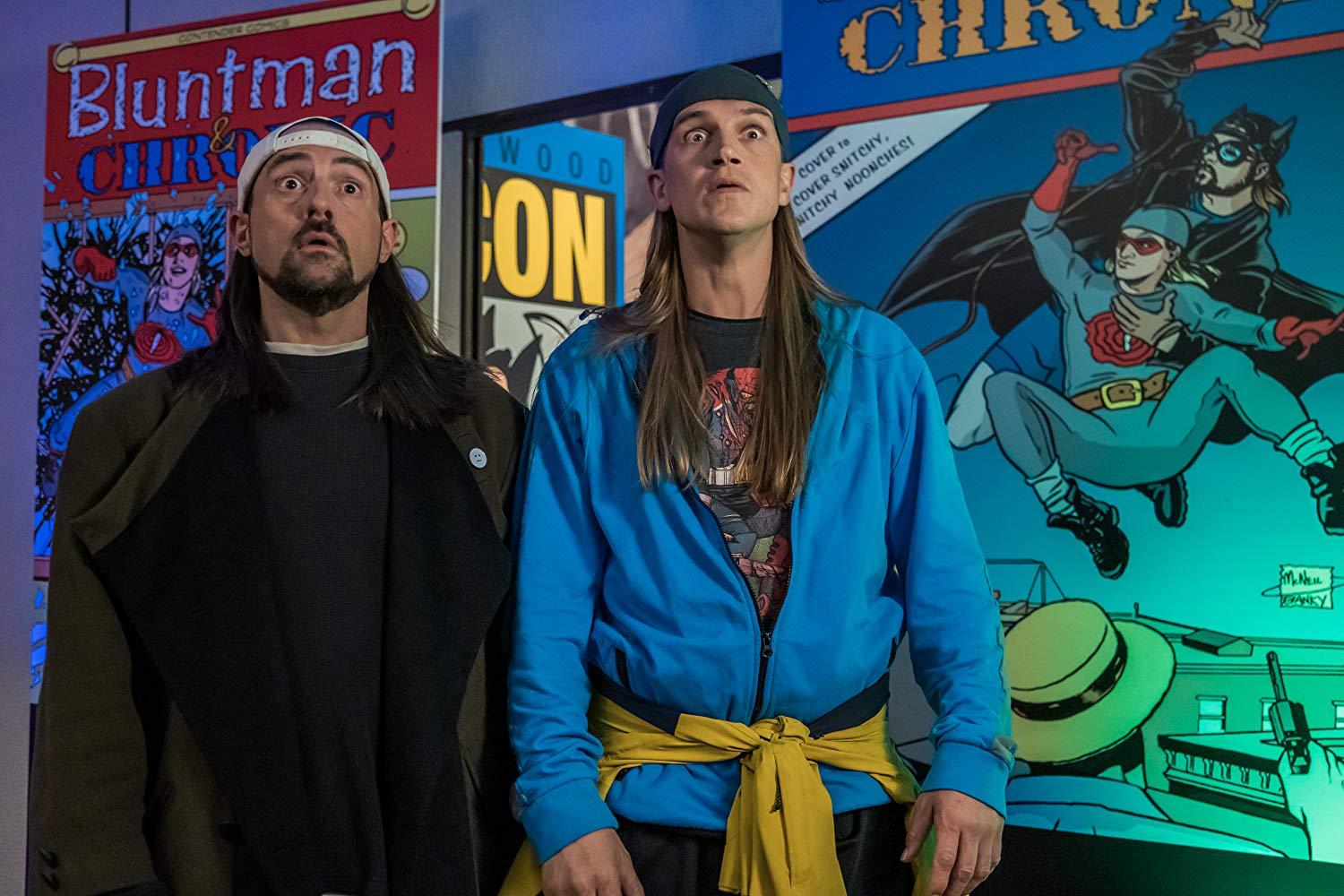 8.0
Jay and Silent Bob Reboot (2019) 1h 35min | Comedy | 15 October 2019 (USA)
Director: Kevin SmithWriters: Kevin SmithStars: Melissa Benoist, Matt Damon, Chris Hemsworth
Summary: Jay and Silent Bob return to Hollywood to stop a reboot of 'Bluntman and Chronic' movie from getting made.
Countries: USALanguages: English
Source: imdb.comDisclaimer: This plugin has been coded to automatically quote data from imdb.com. Not available for any other purpose. All showing data have a link to imdb.com. The user is responsible for any other use or change codes.

Jay and Silent Bob once again try to stop the production of a film about themselves in Jay and Silent Bob Reboot. While on trial for a routine drug violation, Jay (Jason Mewes) and Silent Bob (Kevin Smith) accidentally sign away the rights to their name and likeness to Saban Films. They soon learn from Brodie Bruce (Jason Lee) that the reason for this is that Saban plans to make a new Bluntman and Chronic reboot, to be directed by Kevin Smith. Jay and Silent Bob decide to, once again, go to Hollywood and stop a critical scene from being filmed at the ChronicCon convention. Along the way, Jay is reunited with his former flame Justice (Shannon Elizabeth) and learns that together they have a teenage kid named Milly (Harley Quinn Smith), though she has no idea Jay is her father. Milly, who also was planning on going to ChronicCon, forces Jay and Silent Bob to bring her and her friends Soapy (Treshelle Edmond), Jihad (Aparna Brielle) and Shan Yu (Alice Wen) with them.

18 years after Jay and Silent Bob Stike Back, Kevin Smith returns with a new film that mocks sequels, remakes, and reboots, while being all three at the same time. Arrested for running a grow-op disguised as a chicken sandwich shop, Jay and Silent Bob accidentally sign away the rights to their names to a shady Hollywood lawyer (Justin Long). Learning that a movie is once again being created about the characters of Bluntman and Chronic, Jay and Silent Bob set off to once again stop the production. On a stopover in Chicago, Jay learns that he has a love-child named Milly, full name Millenium Falcon, and despite initially having an antagonistic relationship, Jay slowly learns on this adventure to be a dad to his daughter.

This year marks the 25th anniversary of the release of Kevin Smith’s low budget black and white debut film Clerks, which made him into a cult filmmaker who is loved by fans but often derived by critics. Over the course of the last decade, Kevin Smith has contemplated retirement from filmmaking, planned failed sequels to both Clerks and Mallrats, and directed some weird passion projects, such as 2014’s Tusk and 2016’s Yoga Hosers. After suffering a near-fatal heart attack in 2018, Smith decided to resurrect his most popular characters of Jay and Silent Bob for a sequel/reboot/remake of 2001’s Jay and Silent Bob Strike Back.

Jay and Silent Bob Reboot is a love letter to the fans who have stuck with Kevin Smith throughout his 25-year career. Just like the first film, Jay and Silent Bob Reboot is an incredibly meta film that pokes fun at itself, as the events that it is spoofing unfold. However, things are made even more meta by the fact that, in addition to playing Silent Bob, Kevin Smith also appears as himself in the film, as the director of Bluntman v Chronic. The film is also loaded to the film with cameos, which Craig Robinson, Fred Armisen, Molly Shannon, Tommy Chong, and a few other familiar faces.

Despite the possible nepotism of Kevin Smith once again casting his teenage daughter Harley Quinn Smith as the female lead Millie, the character’s love/hate relationship with Jay is where Jay and Silent Bob Reboot gets most of its heart from. In fact, it can almost be argued that the film is ultimately about being nostalgic for the past, while also learning to be a more mature and responsible person in the present.

Jay and Silent Bob Reboot is undoubtedly a film made for Kevin Smith’s fans. As such, if you have enjoyed the filmmaker’s output over the last 25 years, then you are sure to enjoy this film as well.