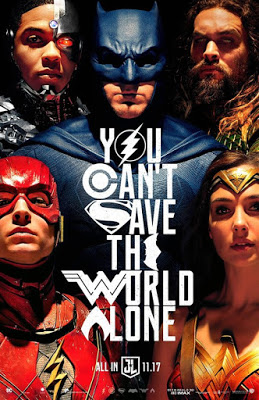 The world’s heroes team together to fight an invading threat in Justice League. As the world recovers from the death of Superman (Henry Cavill), a new threat arises in the form of the invading Steppenwolf (Ciarán Hinds), who comes to Earth looking for the Mother Boxes, which will allow him to take over the planet. Batman (Ben Affleck) and Wonder Woman (Gal Gadot) decide the locate the other heroes on the planet to help them fight this new threat. This includes geeky Barry Allen (Ezra Miller), aka The Flash, Atlantian warrior Arthur Curry (Jason Momoa), aka Aquaman, and the cybernetically reconstructed Victor Stone (Ray Fisher), aka Cyborg.

Over the course of the last four years, Warner Bros has been playing catch-up with Marvel Studios and trying to build its own DC universe, leading up to this film that finally brings the Justice League together. The film takes place soon after the events of Batman v Superman: Dawn of Justice, as the world mourns Superman after he died while fighting the monstrous Doomsday. When Steppenwolf arrives to Earth and seeks to unite the Mother Boxes, Bruce Wayne and Diana Prince decide that the time has come to unite the other superpowered humans on the planet, in order to combine their strength against this powerful threat.

It is probably well documented at this point that even though he remains credited as director of the film, Zack Snyder left Justice League earlier this year as a result of the tragic suicide of his daughter. This resulted in co-writer Joss Whedon, ironically the director of the first two Avengers films, to come on board and finish the film through post-production and reshoots. I’m not going to pretend to know the content of these reshoots, though I do know that frankly Justice League is quite a bit of a noisy, CGI mess.

Justice League is actually strongest during the character interaction moments, which I’m assuming was Whedon’s primary contribution to the script to the film. I do have to say that I quite enjoyed Ezra Miller’s very geeky performance as The Flash and he is the character I would most like to see in a stand alone film. With the team-up being at the center of this film, it results in the supporting characters, including Amy Adams’ Lois Lane and J.K. Simmons’ Commissioner Gordon to somewhat get lost in the shuffle. At least the film gives a fair bit more screen time to Jeremy Irons’ Alfred, even though he remains primarily a figure in the background.

As for the main plot of the film, it’s hard to get truly invested when the main villain is a completely CGI creation. It’s actually kind of sad that they hired a great and emotive actor like Ciarán Hinds to play Steppenwolf, yet his performance is buried under a CGI creature. It’s also quite obvious to Steppenwolf is merely set-up for a larger battle in the future, with the villain even namedropping the character Darkseid. I also have to note that a certain villain’s cameo in the post-credits stinger is way more interesting than anything Steppenwolf does in the film.

An interesting decision that Joss Whedon made after he took over post-production of Justice League is that he brought on Danny Elfman to replace Zack Snyder’s composer Junkie XL. While there is nothing all that memorable about Elfman’s score for the film, it is interesting that he decided to bring back motifs from his score for Tim Burton’s Batman, as well as John Williams’s Superman score. It’s a nice little touch, even though both those musical cues are a bit out of place in these modern DC films.

Coming off the high earlier this year that was Wonder Woman, it is kind of sad that Justice League turns out to be quite the mess than it is. I wouldn’t go as far and say that it is a horrible film, but it is definitely the least interesting of the DC Universe films so far and hopefully the course can be corrected in future films.