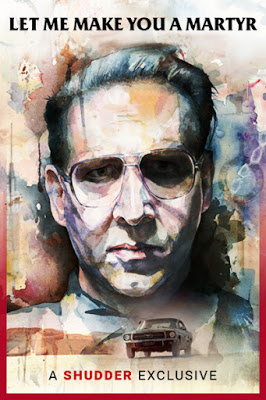 Two adoptive siblings are on the run from their crime boss father and a reclusive hit man in Let Me Make You a Martyr. Drew Glass (Niko Nicotera) finds himself in an interrogation room being questioned by Charon (Michael Potts), who asks Drew to describe how he found himself in this predicament. Drew recounts the story of him returning to his hometown and immediately making trouble for crime boss and Drew’s adoptive father Larry Glass (Mark Boone Junior), who hires a hitman named Pope (Marilyn Manson) to deal with the situation. Drew reunites with his adoptive sister (and lover) June (Sam Quartin) and they come up with a plan to escape the situation they find themselves in.

The feature film debut for filmmakers Corey Asraf and John Swab, Let Me Make You a Martyr is a gritty crime thriller taking place in a small town. The grimy world of the film full of drug addicts, child kidnappers and smooth talking hitmen. Drew Glass is desperate to escape the clutches of his adoptive father Larry and start a new life with June. However, with Pope on his tail, this might not be an easy task to accomplish.

Subscribe to the Sean Kelly Interviews…. podcast for an interview with the filmmakers