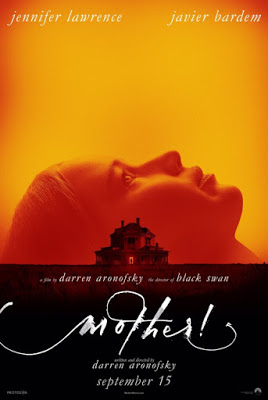 A woman’s tranquil life with her husband is disrupted by the sudden arrival of strangers in Mother!. Mother (Jennifer Lawrence) lives with Him (Javier Bardem) at a secluded farmhouse. Mother spends much of her time renovating the house, while Him tries to find inspiration for his poetry. One day, the couple is visited by a Man (Ed Harris) and Woman (Michelle Pfeiffer), who are invited to stay at the house by Him. However, Mother steadily becomes more bothered by the couple’s invasion.

Mother! is the latest film from director Darren Aronofsky (Requiem for a Dream) and centres around a married coupled, whose tranquil existence is disrupted by the arrival of unexpected guests. The strangers’ arrival is particularly bothersome for Mother, who is trying to make their home perfect, so she can start a family with Him. However, Him seems more interested on the attention that he gets for his writing, which causes some stress in his relationship with Mother.

It isn’t too hard to guess what Darren Aronofsky is trying to say with Mother!, which is more or less a metaphor dressed up as a horror film. A relatively simple description of the film would be that it is like Rosemary’s Baby on Acid, though there is a lot more deeper meaning hiding under the surface of Mother!, which is a film that is ripe for analysis.

What seemingly starts off as simply a family drama quickly turns into something much more. The film builds up to a very intense climax, which is sure to polarize many viewers. However, there is indeed a message to be read within the chaos of this film. There is not much else that I can say about Mother! without spoiling all the plot developments within the film. However, I will say that this is at the very least a film that will get you thinking and that it uses metaphor to comment on the world around us. I also have to make note of the film that Mother! has one hell of a sound mix, with many of the sounds around the house being brought to the foreground. In many ways, the stress and frustration felt by Mother as the film progresses.

Altogether, Mother! is far from an easy watch and there will probably be many people who end up repulsed by the film. However, if you can glean the message that Darren Aronofsky is trying to say, it also ends up being a somewhat important film to watch.