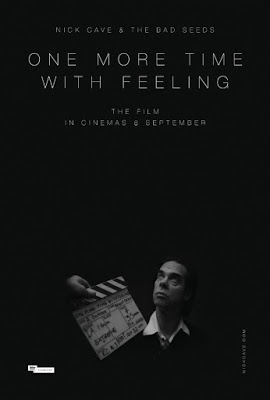 Nick Cave tries to move past personal tragedy, as he finishes the recording of his latest album in One More Time with Feeling. In the summer of 2015, as he was in the process of writing and recording his latest album “Skeleton Tree,” musician Nick Cave’s 15 year old son Arthur died in a tragic accident. The tragedy disrupts Cave’s creative process and he struggles to finish the album, despite the effects this trauma had on him and his family.

One More Time with Feeling is the second documentary in recent years about Nick Cave & The Bad Seeds, following the 2014 hybrid documentary 20,000 Days on Earth. Featuring start black and white photography and narrating by Nick Cave’s poetic inner monologue, One More Time with Feeling is a much more sombre film than the previous film, particularly since Nick Cave is recording while also grieving the death of his son, the events of with he can barely talk about during the film’s interview moments.

One More Time with Feeling is first documentary by director Andrew Dominik (The Assassination of Jesse James, Killing Them Softly), with the film being a mix of Nick Cave & The Bad Seeds performing songs from the album “Skeleton Tree,” interspersed with interviews with Nick Cave and his wife Susie Bick. While there are occasional flashes of colour, the film is presented entirely in black and white and shot with 3D cameras, even though I only watched the film in 2D.

It isn’t immediately apparent that One More Time with Feeling is a film about Nick Cave trying to finish recording while grieving the death of his son. There are early signs that Cave’s creative process has been affected when he is unable to remember the piano chords for the song he is recording. It isn’t until Cave begins specifically talking about recovering from a trauma when the true focus of the film becomes apparent. Nick Cave’s grieving even becomes noticeable in the song lyrics and it will be hard for people to watch One More Time with Feeling without breaking down in tears by the end, particularly as the end credits plays a song sung by Nick Cave’s deceased son.

One More Time with Feeling takes what is essentially a behind-the-scenes documentary about the recording about Nick Cave’s latest album and turns it into an artistic and sombre film about grief, with the end result being a very emotional viewing experience.