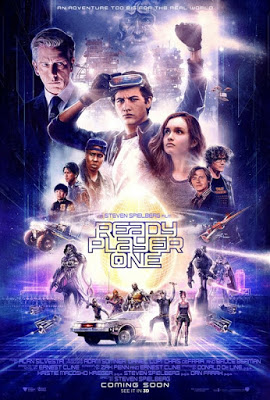 A group of friends try to save a virtual world from an evil corporation in Ready Player One. In the year 2045, most of the world’s cities have degraded into slums and the population find escape in a virtual world known as the OASIS, created by James Halliday (Mark Rylance) and Ogden Morrow (Simon Pegg). On his deathbed, Halliday creates a challenge to find three keys, with the winner inheriting the OASIS. Wade Watts (Tye Sheridan), better known as his avatar Parzival, is a Gunter, hoping to win the quest and make a better life for himself, with him being joined on the quest by his virtual friends Art3mis (Olivia Cooke), Aech (Lena Waithe), Sho (Philip Zhao), and Daito (Win Morisaki). However, the corporation IOI, headed by Nolan Sorrento (Ben Mendelsohn), is also desperate to win the quest by any means necessary.

Steven Spielberg directs this adaptation of the 2011 novel by Ernest Cline. Ready Player One is homage to pop culture of the 1980s and 1990s, with the film filled with countless references to that era. This includes Parzival entering a race in a Back to the Future DeLorean or Aech building a full-sized Iron Giant. Parzival initially sets out on “Anorak’s Quest” on his own, but soon finds himself part of the “High Five” group that includes Art3mis, Aech, Sho, Daito. The quest turns out to have some very real stakes as Nolan Sorrento and, his henchman within the OASIS, i-R0k (T.J. Miller) will do anything to win this quest.

It’s going to be hard to talk about Ready Player One without addressing the backlash that has generated in the seven years since the original novel was published. I will agree that there are problems with Ready Player One if you set out to look for them. The film is all about nostalgia and the CGI worlds are the very definition of ADHD filmmaker. Frankly, I was a bit overwhelmed at the film at first and it wasn’t really until the second half when I truly began to get into the story. Then there is overall soured opinion of geek culture following gamergate, that will allow people to criticize a story that is generally dominated by males, save for a female protagonist who is also a love interest for the male protagonist.

However, I will say that I generally enjoyed Ready Player One. Part of this comes from the fact that I am a self-described geek, who grew up in the 80s and 90s time period the film is referencing. There are many sequences in the film, including one referencing a certain horror film, that left a huge smile on my face. There are so many pop cultural references in Ready Player One that I would have to see the film multiple times to catch them all.

With the bulk of the film taking place in the CGI generated world of the OASIS, the plot of Ready Player One can probably be best compared to films such as Avatar and Tron. While the story is about nostalgia, it also ultimately has the message that living in the past too much is not a good thing. This can be shown in the film’s multiple flashbacks to Mark Rylance as the OASIS’ creator James Halliday, who grew up with all this pop culture, but was ultimately a very sad and lonely man. Rylance’s performance is the main heart of Ready Player One and should be relatable to anyone who is an introvert.

Overall, I will say that Ready Player One is by no means a perfect film and your enjoyment of it will probably depend on how you relate to geek culture as a whole. However, the story is also one that is tailor made for Steven Spielberg and he was the perfect director to bring this world to life.