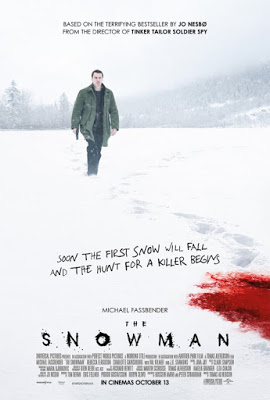 A veteran detective tracks down a serial killer triggered by falling snow in The Snowman. Harry Hole (Michael Fassbender) is a legendary detective in Oslo, Norway, who has recently returned from an absence. His first case is a series of missing women cases, each other which occurred during a snowfall, with a snowman left at the crime scene. Teaming up with recent transfer Katrine Bratt (Rebecca Ferguson), Harry begins to investigate the missing women cases, which may be connected to a decade old serial killer cold case investigated by Bergen detective Gert Rafto (Val Kilmer).

The Snowman is a Norwegian-set crime thriller based on the 2007 novel of the same name by Jo Nesbø. Michael Fassbender stars as veteran detective Harry Hole, who begins investigating a missing women’s case, which soon turns into a hunt for a serial killer that likes to garrote the heads off of his victims. Harry receives taunts from the killer in the mail and together with young partner Katrine Bratt tries to find a connection between the different missing women. A possible suspect arises in Arve Stop (J.K. Simmons), a man currently sponsoring a bid for the Winter Sports World Cup, who might also be a sexual predator.

The Snowman is a film that seems to be the latest in a line of crime novel adaptation, following the success of David Fincher’s Gone Girl. Coming from European source material, The Snowman also hearkens back to The Girl with the Dragon Tattoo, albeit with a Norwegian setting, instead of Swedish. In fact, like David Fincher’s 2011 adaptation of The Girl with the Dragon Tattoo, filmmaker Tomas Alfredson (Tinker Tailor Soldier Spy) has an international cast playing Norwegian characters. This includes Irish/German actor Michael Fassbender, Swedish actress Rebecca Ferguson, British actress Charlotte Gainsbourg, and Americans Val Kilmer and J.K. Simmons. The film even features some stunt casting of familiar faces to play victims of the serial killer that Harry Hole is tracking.

The Snowman was marketed almost like it was the next coming of Se7en and/or Zodiac, with the promise of horror film level violence. However, even though The Snowman is quite a violent film, most of the actual violence is done off camera, with you just seeing the grisly bodies. Also, most of the film is a somewhat slow-paced procedural, which includes flashbacks to the previous investigation by Gert Rafto, played by an incredibly poorly aged and raspy voiced Val Kilmer. Despite the film’s attempts to build some false leads and red herrings, it is ultimately relatively easy to figure out the identity of the killer in The Snowman, with me figuring things out at least 10 minutes before Harry Hole does.

I’m not sure if there’s a plan to adapt Jo Nesbø’s other Harry Hole novels, but The Snowman doesn’t exactly leave me clamoring for more. The film is ultimately a slow placed procedural that desperately wants to be a David Fincher level thriller.