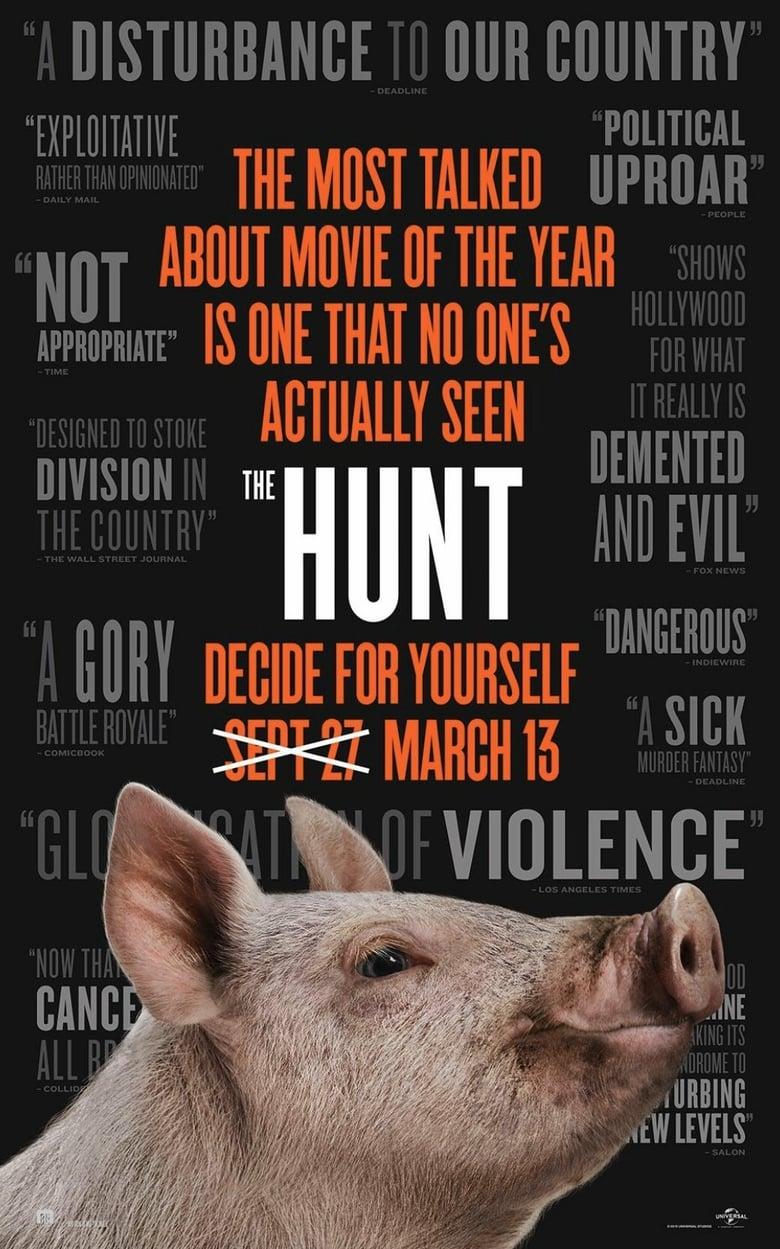 Twelve strangers awaken in an isolated area to find that they are being hunted for sport in The Hunt. A group of people awaken to find themselves bound in an open field. It isn’t long until shots begin firing and some of the group recognize their situation as the infamous “Manor-gate,” where “Liberal elites” kidnap and hunt “normal folk” for sport. However, among the victims is Crystal (Betty Gilpin), who begins fighting back against the hunters, as she begins to fight her way to the group’s leader Athena Stone (Hilary Swank).

The Hunt is a mix of survival horror and political satire directed by Craig Zobel (Compliance, Z for Zachariah) from a script written by Damon Lindelof (LOST, Watchmen) and Nick Cuse (The Leftovers). The film, which features a plot somewhat influenced by Richard Connell’s short story “The Most Dangerous Game,” has become infamous for the fact that it was delayed for six months following a series of mass shootings in the United States. Indeed, on the surface, a film about humans being hunted by sport does sound like a tasteless endeavour. The Hunt begins with a series of cryptic text messages between a group of friends, before fast-forwarding to the group of would-be victims awakening in an unknown location. As many of these individuals are quickly killed off, I do not want to say too much about this group, though there is a clever kid of stunt casting for someone who turns out to be a false protagonist. It isn’t long until the film settles on Crystal, who finds herself being quite capable of being able to fend off her attackers.

The element that is either going to make or break The Hunt for most viewers is the film’s over-the-top political satire, which plays up the worse stereotypes of both left and right-wing individuals. As someone who considers himself a Liberal, I do admit that I found it uneasy that the “Liberal elites” were cast as the villains of the film. However, The Hunt does feature some clever revelations in the third act, include the motivations for the mysterious Athena Stone, who is merely a figure in the background until it is time for the final confrontation. Arguably, both Betty Gilpin (GLOW) and Hilary Swank give the most memorable performances in The Hunt, as two characters on opposite ends of the political spectrum, neither of whom end up being one-dimensional characters.

In the end, The Hunt is probably going to end up being more well known for its controversy than the film itself, which didn’t end up being half-bad, despite me finding the political satire a bit too much to handle.

The Hunt is Now Available