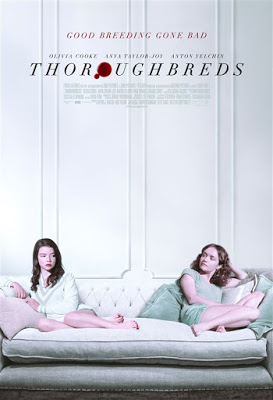 Two teenage girls concoct a murderous plan in Thoroughbreds. Amanda (Olivia Cooke) is a sociopathic teenager from an upper class family, whose mother has hired Amanda’s old friend Lily (Anya Taylor-Joy) to hang out with her. While Amanda does have a feeling in the world, Lily holds an immense hatred towards her stepfather Mark (Paul Sparks). Amanda casually suggests to Lily that they kill Mark and the two hire local drug dealer Tim (Anton Yelchin) to help them commit the deed.

Thoroughbreds is a dark comedy about two upper class teenage girls, who plan to commit murder. Amanda has been an outcast ever since she killed her horse and is sent to hang out with Lily in an attempt to have some social engagement. However, it turns out that Lily’s life is also less-than-ideal, as her stepfather Mark frequent berates Lily and her mother and is prepared to ship Lily to a school for teenagers with behavioral problems. It is because of this that Lily and Amanda decide that Mark must go.

Written and directed by first-time filmmaker Cory Finley, Thoroughbreds teams together the up-and-coming actress duo of Olivia Cooke (Me and Earl and the Dying Girl) and Anya Taylor-Joy (The Witch, Split). The film also marks the final role for Anton Yelchin, whose role of Tim was shot mere weeks before Yelchin’s tragic death in the summer of 2016. The story of Thoroughbreds is told in four chapters, as the two old friends of Amanda and Lily reunite after a number of years apart and they develop a plan to kill Mark. Without going to much into detail, each chapter of the film focuses heavily on a single character, revealing character development that might not have been apparent before.

Thoroughbreds is a film that is built heavily on dialogue, with the film almost being structured like a play. Olivia Cooke probably has the showiest role in the film, with her performance as the “antisocial with schizo tenancies” character of Amanda being a complete 180 from her previous role in Me and Earl and the Dying Girl. However, Anya Taylor-Joy also has to give a challenging performance, as Lily is revealed to be a much more layered character, who might even be a bit crazy herself. It is a bit of a shame that Anton Yelchin doesn’t get more to do in this film, since Thoroughbreds is a reminder of a rising star gone too soon.

Overall, I have to say that Thoroughbreds is a smart and entertaining dark comedy that shows off the skills of both Olivia Cooke and Anya Talor-Joy.