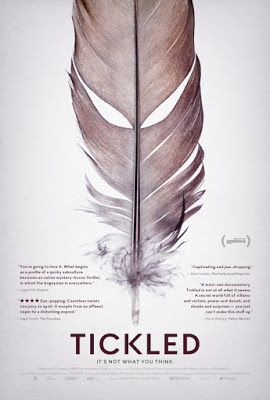 A journalist investigates a competitive tickling league in Tickled. David Farrier is a pop culture journalist in New Zealand, who likes to focus on the weird and bizarre. One day he comes across a video for “Competitive Endurance Tickling” and decides to investigate this apparent tickling league. What he discovers is way bigger than he has ever imagined.

Tickled is a documentary that really needs to be seen to be believed. The story all begins when journalist David Farrier finds out about this”Competitive Endurance Tickling,” which interests him enough to investigate this story further. However when Farrier contacts Jane O’Brien Media, which runs the tickling league, he ends up receiving a vitriol-filled response stating that the company does not want to associate itself with a homosexual journalist. The only interests David Farrier further and heads out to get to the bottom of this competitive tickling league.

It is probably best to see Tickled knowing as little about David Farrier’s investigation as possible. What I can say about the film that this is indeed one of those stranger than fiction cases, which will likely leave people thinking “Is this for real?” You wouldn’t really expect a documentary about tickling to have so many twists and turns. While in some ways David Farrier’s investigation comes off as somewhat comical, there is a quite scary undertone to all of these events.

I can’t really say all that much more about Tickled without giving away all of the film’s various twist and turns. As such, all I have left to say about Tickled is that this is a documentary that quite worth checking out.