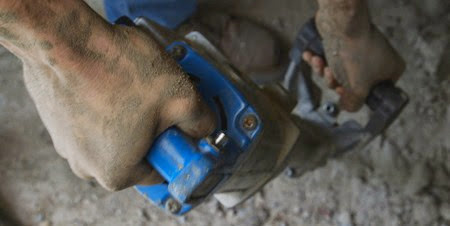 Last night saw the Toronto premiere of Cutaway, the new short film by Kazik Radwanski (Tower, Princess Margaret Blvd).  Cutaway is the story of a momentous development of a man’s life, told entirely through close-ups of his hands.  Those familiar with Radwanski’s previous films would know that he has the tendency of shooting quite close to the main protagonists, in an almost documentary fashion.  Cutaway can almost be considered the next step of that evolution, since the camera is real close-up to the subject.  In fact, it can almost be said that the hands themselves are the main character of this short.  Cutaway makes heavy use of framing to depict the hands performing tasks, such as using tools and sending texts.  There is very little, to no, dialogue in Cutaway, with the story of the film visually revealing itself over the course of its seven minute runtime.  Altogether, Cutaway is a very visually intriguing short. 8 | LIKED IT Cutaway will be screening at the TIFF Bell Lightbox on January 9, 2015 as part of Canada’s Top Ten Shorts.