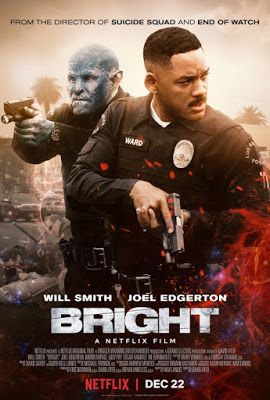 A police officer and his Orc partner have to protect a magic wand from falling into the wrong hands in Bright. Set in a world where mystical creatures live among humans, Daryl Ward (Will Smith) is an LAPD officer, who is returning to duty after being shot on the job. Ward is distrustful of his Orcish partner Nick Jakoby (Joel Edgerton), who is the subject of much prejudice by the police force. While on a call, Ward and Jakoby encounter a young elf named Tikka (Lucy Fry), who is in possession of a magic wand, which can only be used by magical beings known as “Brights.” With everyone around them, including fellow officers, willing to kill to possess the wand, Ward and Jakoby go on the run with Tikka, while they are tracked down by both Kandomere (Édgar Ramírez) of the FBI’s magic division and the dark elf Leilah (Noomi Rapace).

From director David Ayer (Suicide Squad, End of Watch) and writer Max Landis (Chronicle) comes the buddy cop fantasy Bright. The film takes place in a world that happens have mystical creatures, such as Orcs, Elves, and Fairies living among the human population. Nick Jakoby is the first Orc to become a police officer, however he is met with much scorn, because of the believe that everyone of his race is evil. Even Daryl Ward is bothered, since he believes Jakoby let the Orc that shot Ward go free. However, Ward and Jakoby are forced to put their differences aside when they have to stop a group of dark elves lead by Leilah from recovering a wand that can be used to resurrect the dark lord from multiple millennia ago.

It seems the mindset of Max Landis when writing Bright is a combine a typical buddy cop film like Lethal Weapon with the fantastical creatures found in such properties like Dungeons and Dragons and World of Warcraft. Bright starts off in a world that is already relatively established, with Jakoby having already having been Ward’s partner for a while. On top of being a buddy cop action film, Bright is also planting seeds for some sort of hero’s quest that would be explored in sequels, the first of which is already under development.

I’m trying very hard not to criticize Bright for using the Netflix distribution model, however it is hard not for me to view the film as anything other than a bad direct-to-video feature. It’s really hard to swallow a world where humans live along with Orcs and Elves, especially since the film opts to leave out much of the backstory. In fact, the only real piece of history provided is that Orcs had aligned themselves with a Dark Lord 2000 years ago and as a result they are shunned by much of society. It’s not hard to spot the similarities between the prejudice aimed at Nick Jakoby and the racial profiling that happens in our world. However, much of that is dropped after the first act, when the focus is turned onto Tikka and the wand she possesses.

It is hard not to weep for the career of Will Smith watching Bright, as he has gone from being one of the biggest box office stars to being the lead in a borderline B-movie being released on a streaming service. As least Will Smith didn’t have to spend the entire film under bluish prosthetic make-up like Joel Edgerton did. If fact, the only person that seems to be truly giving it her all in this film is Noomi Rapace as Leilah, who does make a pretty good looking elf. At least she looks better in the elf make-up than Edgar Ramírez’s Kandomere.

It is almost a Godsend that Bright was released to Netflix instead of theatres, since at least I do not feel that my money was wasted watching this. Ultimately, this film is an experiment to see if Netflix can be used as a platform to launch blockbuster franchises and in the case of Bright, that answer is a big fat no.