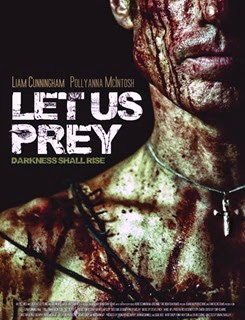 Police Constable Rachel Heggie (Pollyanna McIntosh) is starting her first night at a police station in a small Scottish town.  On her way to the station, she picks up a delinquent named Caesar (Brian Vernel), who has apparently hit a stranger (Liam Cunningham) standing in the middle of the road.  At the station, Rachel becomes acquainted with her sergeant MacReady (Douglas Russell) and fellow officers Jack Warnock (Bryan Larkin) and Jennifer Mundie (Hanna Stanbridge).  When the stranger shows up at the station and joins three others in the holding cells, it sets the stage for a supernatural showdown, where the wicked pay for their sins. One of the descriptions of Let Us Prey is that it is a supernatural twist on the plot of Assault on Precinct 13.  It’s indeed very obvious that director Brian O’Malley is influenced by John Carpenter, as evidenced by the film’s excellent pulsating score.  The film features a great performance by Liam Cunningham (Game of Thrones) as the mysterious supernatural stranger, who has the power of making people confront their sins. Practically every individual that walks into the police station has done some horrible act that they must atone for, leading up to a very bloody climax.  Let Us Prey is a film that seems to use its gory violence to shock more than entertain.  That said, most of the people who brutally die in the film probably deserve it.  It quickly becomes apparent in the film that it is probably not a coincidence that so many evil people have gathered in one place and that this siege is a pre-destined showdown.  Altogether, Let Us Prey is bolstered by its great Carpenteresque score and lead performance by Liam Cunningham to become a decent journey into possibly the most evil police station in history.8 | LIKED IT