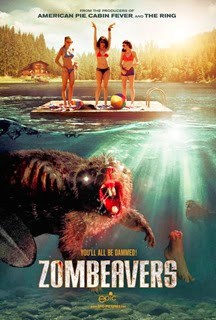 Three friends, Mary (Rachel Melvin), Jenn (Lexi Atkins) and Zoe (Cortney Palm), travel up to Mary’s cousin’s cottage for a weekend getaway. Jenn recently found out that her boyfriend Sam (Hutch Dano) cheated on her, which makes it incredibly awkward when he and, Mary and Zoe’s boyfriends, Tommy (Jake Weary) and Buck (Peter Gilroy) crash the party.  However, relationship issues become less of a concern when it is discovered that a toxic waste spill at a nearby beaver dam and mutated the beavers into vicious zombies. The six friends now must fend for their lives, if they ever expect to leave the lake alive. Based on the title alone, Zombeavers is not a film that should be taken all that seriously.  The film has an inherently ridiculous premise, which is quite entertaining to watch.  However, the film is not a perfect one, particularly involving the relationship drama that takes up much of the first act of the film.  In addition, not that many of the characters are all that likeable at first, especially the guys, who seem to have nothing but sex on their minds. The film also plays coy, right up until the end, who the true protagonist of the group is. While not the obvious choice at the start, the one they end up with turns out to be the right one. After the rough first act, Zombeavers improves greatly after the title creatures show up.  The film features some great animatronic work for the beavers, which do look obviously fake, however that only adds to the charm. The plot of the film gets progressively more ridiculous as it goes along, particularly a development in the third act, which really needs to be seen to be believed. Overall, Zombeavers is a quite fun b-movie homage.8 | LIKED IT