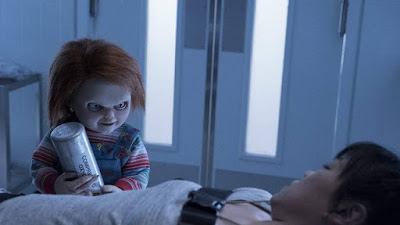 The killer doll stalks patients at a mental hospital in Cult of Chucky. Nica Pierce (Fiona Dourif) has been institutionalized for the past four years, taking the blame for killer doll Chucky’s (Brad Dourif) last round of killings. As part of Nica’s therapy, Dr. Foley (Michael Therriault) brings a Chucky doll to group therapy, which includes “Multiple” Malcolm (Adam Hurtig), suspicious Claire (Grace Lynn Kung), and motherly Madeleine (Elisabeth Rosen). Soon the patients begin turning up dead as the hospital, with Nica placing the blame on Chucky. Meanwhile, Chucky’s former target Andy Barclay (Alex Vincent) comes up with a plan to stop the doll once and for all.

Cult of Chucky is the seventh film in the Child’s Play franchise, as well as a direct follow-up to 2013’s Curse of Chucky. Fiona Dourif, daughter of Chucky voice actor Brad, returns as wheelchair-bound protagonist Nica Pierce, who has now spent the last number of years in psychiatric care. When patients begin dying in brutal ways, Nica is convinced that Chucky has returned, even though Dr. Foley just believes it to be a part of Nica’s psychosis. However, it turns out that Chucky has indeed returned and that he has a new trick up his sleeve.

With Cult of Chucky arriving 29 years after the original Child’s Play, the wisecracking killer doll Chucky has become one of the most unlikely villains to experience longevity in the horror genre. Believe it or not, Cult of Chucky was the first film in the series I watched, but I do like it enough to want to go back and watch the others. While Cult of Chucky is not a flawless film, Chucky’s one-liners are incredibly entertaining and there is also some very unique kills. Altogether, Cult of Chucky is some campy fun.