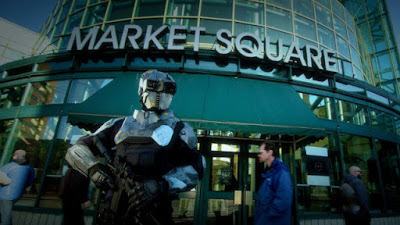 A man and his sister go on the run a militant police state in Defective. The State Enforcement Agency has resulted in a 47% reduction of crime through the use of their cyborg Protectors of Peace or Suits. After witnessing a Suit performing a public execution, Rhett Murphy (Colin Paradine) is made a target of the SEA. Rhett is reunited with his estranged sister Jean (Raven Cousens) and they both end up going on the run from SEA operatives Ora Green (Ashley Armstrong) and Allison Jacobs (Jamie Elizabeth Sampson). Teaming with resistance leader Pierce (Dennis Andres), Rhett and Jean try to put an end SEA’s grip of fear on the state.

Defective is a science fiction thriller, which has a plot highly reminiscent of Minority Report, with an added Robocop element. Society has seemingly become a safer place with the State Enforcement Agency and their Protectors of Peace. However, those who don’t follow the strict laws are deemed defective and subject to death. After being made a target of the SEA, Rhett Murphy plans on escaping the state, taking his estranged sister and SEA employee Jean with him. However, with the SEA gaining increasingly more control of society, Rhett is recruited to put a stop to them once and for all.

One very positive thing I have to say about Defective, from writer/director Reese Eveneshen, is that even though the film was produced on an extremely limited budget, it is actually quite sleek-looking and well made. However, even though Reese Eveneshen does have some filmmaking prowess, his writing leaves a lot to be desired, particularly the film’s not very natural sounding dialogue. Despite those flaws, Defective is still a solid science fiction thriller.