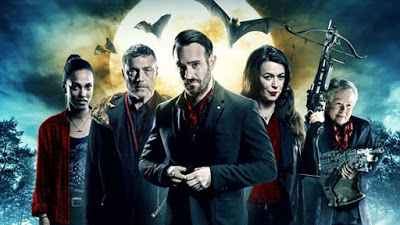 A council of vampires find themselves under siege by the military in Eat Locals. A council of eight vampires, including Henry (Charlie Cox), Peter (Tony Curran), Angel (Freema Agyeman), and Vanessa (Eve Myles), gather together in an old farmhouse for their semi-centennial meeting. One of the topics of the meeting is whether to add a human named Sebastian (Billy Cook) to their ranks, or just eat him. However, the farmhouse comes under siege by a military raid lead by Col Bingham (Robert Portal) and priest Larousse (Mackenzie Crook). The vampires must fight for survival, if they ever expect to escape by dawn.

Actor Jason Flemyng (Lock, Stock and Two Smoking Barrels) makes his directorial debut with the vampire siege comedy Eat Locals. The council of vampire overloads gather for a meeting to discuss topics, such as who occupies what territory and what humans are OK to feed upon. However, the meeting is disrupted by a military siege, which leaves the vampires trapped in the farmhouse. With only a few hours left until dawn, this council of vampires try to come up with a plan to survive.

One of the most notable aspects of Eat Locals is the who’s who of British talent in the cast, including Charlie Cox (Daredevil), Tony Curran (Underworld: Evolution), Mackenzie Crook (The Office), and Freema Agyeman (Doctor Who). Eat Locals is a fairly entertaining film, which includes moments, such as elderly vampire Alice (Annette Crosbie) fending off the military with a machine gun. While Eat Locals probably isn’t a particularly memorable film, I still had a fairly good time watching it.