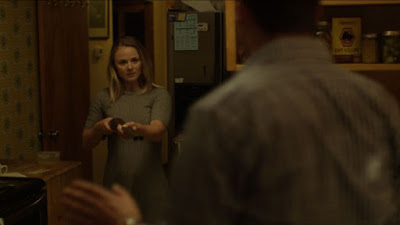 A private investigator is imprisoned and tortured by a serial killer in Poor Agnes. Agnes (Lora Burke) is a sociopathic woman living on her own in an isolated house. One day, Agnes is visited by Mike (Robert Notman) seeking information about a missing person. It isn’t long before Mike finds himself chained up in Agnes’ basement and subject to dehumanizing torture techniques. Instead of killing Mike right away, Agnes would rather toy with him and even begins a pseudo-relationship. At the same time, Agnes begins stalking her next victim, a shy computer guy named Chris (Will Conlon).

In Poor Agnes, director Navin Ramaswaran (Chasing Valentine) offers a look into the mind of a serial killer. Haunting narration by Agnes is peppered throughout this story of a sociopath, who would rather spend time breaking down and getting to know her next victim. As part of her humiliation and torture of Mike, Agnes is cruel and violent one minute, yet sweet and nurturing the next. This results in the slow development of Stockholm Syndrome, especially as Mike is forced to assist Agnes with her next murder.

Poor Agnes is a thriller built around a chilling performance by Lola Burke in the titular role. Burke is totally believable as an empathy free sociopath, who just tortures Mike for her own enjoyment. However, Agnes turns out to be an incredibly complex character and at times you are not sure if she wants to kill Mike or bring him down to her level, so they can be equal partners. Altogether, Poor Agnes is a darkly humorous and chilling portrait of a serial killer.