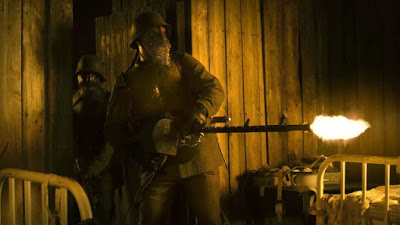 A group of soldiers in a underground German bunker find a parasite that turns the infected into violent zombies in Trench 11. At the tail end of the First World War, British Major Jennings (Ted Atherton) finds a seemingly abandoned German bunker at Trench 11, which was the base of operations for crazed chemical weapons engineer Reiner (Robert Stadlober). Jennings recruits an American platoon lead by Budman (Luke Humphrey), as well as Canadian digger Berton (Rossif Sutherland), to go inside the bunker and see what the Germans were developing. However, it turns out the Trench 11 bunker wasn’t as abandoned as it initially appeared.

Trench 11 is a dark and claustrophobic tale of parasitic terror, set during the First World War. In a German bunker 100 feet below the ground, the team of soldiers discover that Reiner has developed an advanced parasite that infects humans and causes them to degrade into violent zombie-like creatures. In addition to the allied team, Reiner and his superior Müller (Shaun Benson) arrive with a team of soldiers to clean-up the mess, though Reiner turns out to have no real intent to destroy his creation.

Set in a location with extremely low lighting and tight corridors, Trench 11 is film that combines a zombie/infection plot with the claustrophobic atmosphere of The Decent. Trench 11 can also be compared to the TV show The Strain, particularly in how the infection is spread through parasitic worms, which are seen coming out of bodies in huge numbers. Heavy on atmosphere and some pretty icky gore, Trench 11 is a horror film that is worth checking out.