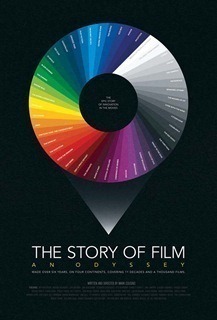 Well, The Story of Film has finally come to an end, as I saw the final three episodes last night.  One more summary post before my full wrap-up. Episode 13: New Boundaries
This episode focused on the final innovations of celluloid in the 1990s, as digital effects started to emerge.  One interesting aspect of this episode is the Iranian director Abbas Kiarostami, who made a trilogy of films, each building upon true experiences.  The episode also looks into the rise of J-horror, as well as Lars von Trier and his dogme 95 manifesto.  The episode also looks at Michael Haneke, most notably his 1997 fourth wall-breaking film Funny Games. Episode 14: The Digital Revolution
On the flip-side of the previous episode, this episode focuses on the rise of digital effects in the 1990s, starting with Terminator 2.  The episode also looks into the films of Quentin Tarantino, The Coen Brothers, Gus Van Sant, and Baz Luhrman.  Particularly interesting is a side-by-side comparison of Alfred Hitchcock’s Psycho and Gus Van Sant’s remake. Episode 15: Cinema Today and The Future
The final episode asks whether or not film is still innovative.  It notes the sudden popularity of documentaries in the 2000s and how feature films, such as the Bourne Supremacy, used “documentary style” hand-held cinematography.  The episode also argues that film has gone full circle and gives examples of modern films that hearken back to the beginnings of cinema.  In terms of innovation, we go all the way to Russia and Alexander Sokurov’s The Russian Ark, which was shot in one single 96 minute take.  In final minutes, we are left to ponder what cinema would be like in the year 2046 – Would it be interactive dreams like Inception, would it be outright banned, or will it becoming more integrated in our society.  I guess we’ll have to wait an see. That wraps up my episode summaries.  Up next is my final review.