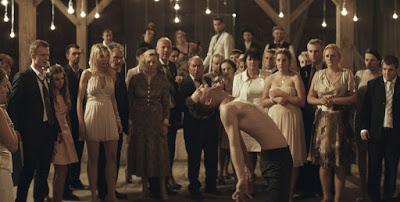 A groom gets possessed during his wedding day in Demon. Peter (Itay Tiran) is preparing to marry his fiance Zaneta (Agnieszka Zulewska) at her family’s country home in Poland. The night before the wedding, Peter finds skeletal remains on the property, after which he begins acting strangely during the wedding reception.  It quickly becomes apparent that that there is a spiritual unwanted guest to this wedding and that it has taken control of Peter.

Demon is a family drama that is based on the play Clinging and is inspired by the Jewish legend of the dybbuk. Even though the film does involve a possession, I would be hard pressed to call Demon a horror film. The film is much more about the family drama that results from this possession, particularly in how Zaneta’s father tries to keep the reception going at all costs, despite what is happening to Peter.

Demon is a refreshing take on the typical demonic possession story and it can even be argued that the spirit that takes control of Peter isn’t even truly evil. There is much ambiguity to the plot of the film and Demon has a relatively open ending, with no real resolution to the events of this wedding. It’s quite a tragic turn of events that director Marcin Wrona suddenly passed away last weekend, since he definitely showed some promise with this film.