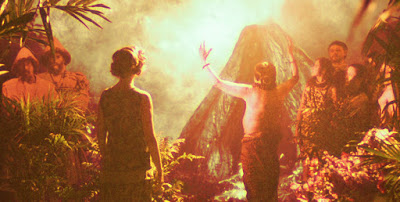 Guy Maddin and co-director Evan Johnson embark on a surreal cinematic journey in The Forbidden Room. A series of interconnected narratives tells stories inspired by forgotten genres from cinema’s past. Over the course of this increasingly weird and surreal journey, a number of familiar faces show up, including Mathieu Amalric, Charlotte Rampling, Udo Kier, and Guy Maddin regular Louis Negin.

Known for his somewhat unusual odes to classic cinema, such as The Saddest Music in the World, My Winnipeg, and Keyhole, Guy Maddin returns with what is probably his most incoherent and weird film yet. He is joined by first time director Evan Johnson, who previously worked as a camera operator on My Winnipeg. The Forbidden Door takes many different narratives and film genres and scrambles them together, including a crew aboard a submarine, a woodsman trying to save a damsel in distress, and a thief who steals squids, which is a crime punishable by death.