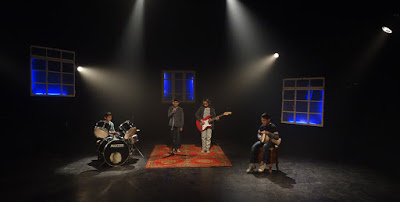 A young refugee from Gaza goes on to win Arab Idol in The Idol. Mohamad Assaf grew up in the the troubled Palestinian region of Gaza. As a ten year old, he formed a band with his older sister Nour, who recognized Mohamad’s immense singing talent. Many years later, Mohamad Assaf would sneak out of Gaza on a fake passport, in order to participate in the Arab Idol singing competition, which will make him an inspiration for Palestine and a worldwide sensation.

Acclaimed Palestinian filmmaker Hany Abu-Assad (Omar) directs this biopic about wedding singer turned worldwide sensation Mohamad Assaf. The Idol has two very distinct halves to it. The first deals with Mohamad as a child, performing in a band with his sister Nour and friends Ashraf and Omar. However, when Nour suffers kidney failure, Mohamad gives up singing and does not try again for many years, when he decides to sneak his way into Cairo to audition for Arab Idol.

Since The Idol is based on true events, there is not that much suspense about whether Mohamad Assaf will actual win the Arab Idol competition. However, the film still makes for a very inspirational and crowd-pleasing story, which can almost be seen as the Arab version of Slumdog Millionaire. Even for those not all that familiar with the actual story, The Idol is a very well-done biopic of Mohamad Assaf, who embodies the hope that Palestinians can overcome their prevailing despair.