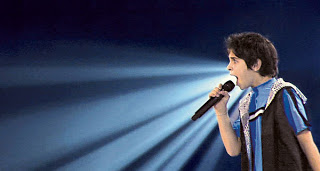 Two screenings sandwiched my third volunteer shift (which was my busiest) and they were both decent offerings.

First, in the morning, I saw the Greg Kinnear film Flash of Genius, which is about the inventor of the intermittent windshield wiper, who sues Ford after they use his design without his knowledge.

It was touching movie. Greg Kinnear plays his role as a sort of “everyman” and his behaviour adds humour to what is essentially a drama.

It’s probably not the best “based on a true story” film, but I thought it was good enough.

Sounds Like Teen Spirit…a popumentary is a whole other story. It is a documentary about a youth singing contest in Europe and just seeing all theses kids sing makes it a fun lighthearted film.

This was definitely not in the same vein as the more serious films at the festival (including the film I’m seeing tomorrow), but I had a good time with it and it was a fresh film in a festival that was described by some of having “depressing films.”

The festival is now over halfway complete. I’m seeing my next film tomorrow evening and I hope to pick up some tickets for shows on Thursday and Saturday (including, hopefully, The Brothers Bloom, which went back on sale). I also have my final volunteer shift on Friday, so it still is going to be a busy week.