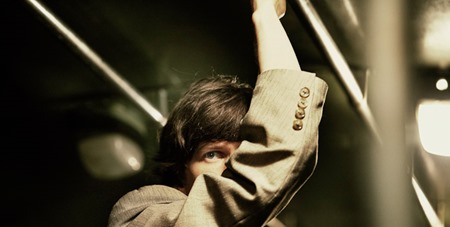 British comedian Richard Ayoade (The IT Crowd) follows up his directorial debut Submarine with this highly surreal and stylized adaptation of the famous Dostoevsky novella. The Double focuses on Simon James (Jesse Eisenberg), a meek man, who lives a really unnoticeable existence.  His boss Mr. Papadopoulos (Wallace Shawn) fails to realize that Simon has been working hard at the company for seven years and Simon has great difficultly revealing his attraction towards his co-worker Hannah (Mia Wasikowska). Simon’s world gets turned upside down when the company he works at hires a new worker named James Simon, who happens to be Simon’s exact doppelganger, except much more confident. James begins as a friendly acquaintance, even offering Simon tips about how to attract Hannah. However, it soon becomes apparent that James is slowly taking over Simon’s life by taking credit for Simon’s accomplishments at the company and even taking a liking to Hannah. As such, Simon begins a battle of wits with his greatest enemy – himself. It is quite obvious that the story of The Double is a metaphor for the identity issues many people face. Even though they are two separate people in the story, Simon and James are basically just physical representations of Sigmund Freud’s concepts of the id and ego, with Simon being the organized ego and James being the desirable id. It was definitely enjoyable seeing Jesse Eisenberg act with himself as two completely different personalities. The Double is quite a bit darker than Richard Ayoade’s previous film, though the film still has many comedic moments, as well as similar visual elements seen in Submarine (such as characters narrating their own notes against a black background). Speaking of which, the film features cameo appearances by most of the main cast of Submarine, as well as, Ayoade’s co-star from The IT Crowd, Chris O’Dowd. Probably the most hilarious and enjoyable of these cameos was Paddy Considine appearing in a cheesy sci-fi serial that was shown multiple times playing on TV. The Double was filmed in a very stylized manner, which gives the film a bit of noir feel to it.  In addition, I was also very impressed by The Double’s use of sound, with many scenes featuring a minimal and rhythmic sound mix.  It definitely helped to add to the overall surreal feel of the film. I can definitely say that The Double is no sophomore slump for Richard Ayoade and in many ways it further establishes him as one of the more interesting directors to come around in recent years and I shall look forward to seeing what Ayodade does next. Overall The Double was a quite enjoyable comedic thriller.8 | LIKED IT