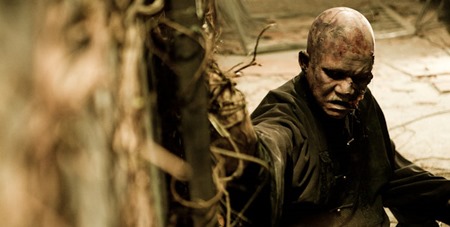 Hong Kong pop star, turned director, Juno Mak directs that a film that is meant as a homage to the 1985 vampire comedy Mr. Vampire, even casting that film’s star Chin Siu-Ho in the lead role. In Rigor Mortis, Chin plays an aging actor, who is mourning the loss of his wife and son and moves to a haunted public housing tenement. Chin attempts to hang himself, but is saved by a former vampire hunter, who now works as a chef in the tenement’s restaurant.  Meanwhile, an elderly man named Uncle Tung (Richard Ng) is killed in a fall and his distraught wife Auntie Mui (Hee Ching Paw) performs the ritual to bring Tung back as a vampire, which begins a series of events that plunges the tenement into supernatural chaos. I sadly have to say that Rigor Mortis is by far the most disappointing film of the five films I’ve seen so far in this year’s Midnight Madness line-up. Of course, I have to admit that my less than stellar response is not entirely the film’s fault, since I had been waiting in line during a thunderstorm, which probably affected my overall mood.  Also, I have to say that Rigor Mortis was somewhat slowly paced, which didn’t make it the most exciting film to be watching late at night and I was constantly fighting sleep all throughout the screening. I should probably start off with what I liked about Rigor Mortis.  Namely I liked all the action and horror elements of the film.  There are a number of fight scenes in the film, which I would describe as “supernatural martial arts.”  I thought that these action moments, particularly the one at the end, were quite entertaining to watch. I have not seen Mr. Vampire, though I would say that I now want to, I did think that Rigor Mortis had a similar vibe to films like Chinese Ghost Story and the film had an appropriate mood to it. Now for the negative aspects of the film. Like I said earlier, Rigor Mortis has a somewhat slow pace to it and the supernatural events were few and far between. In fact the vampire, who is the character that the film is centred around, doesn’t really appear in full force until the climax. In addition, there is a large reliance on CGI effects, particularly for a pair of twin ghosts, which doesn’t always come off well on screen. I can definitely say that I didn’t hate Rigor Mortis and I will be perfectly willing to giving the film another shot. However, when it comes to this year’s Midnight Madness selection, this film is currently for me at the bottom of the pile. 6 | WATCHABLE