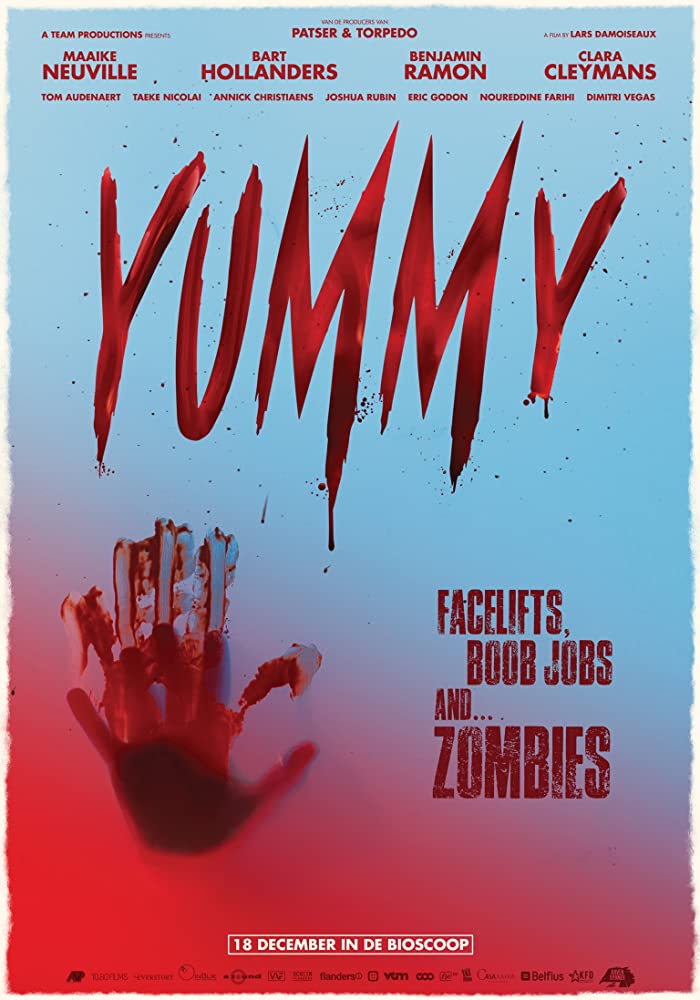 A zombie outbreak occurs at a plastic surgery hospital in Yummy. Alison (Maaike Neuville) is a very self-conscious woman, who travels with her mother Oksana (Taeke Nicolai) and boyfriend Michael (Bart Hollanders) to Klinika Krawczyk in order to receive a breast reduction operation from Dr. Krawczyk (Eric Godon). However, the test subjects of a “rejuvenation treatment based on experimental skin cell technology” escape from the basement and begin to wreak chaos around the hospital.

Yummy is a zombie comedy from first-time Dutch filmmaker Lars Damoiseaux. As the undead spread carnage around this plastic surgery hospital, a number of survivors try to make their escape. This includes Alison, her mother Oksana, and boyfriend Michael, as well as Dr. Krawczyk, head nurse Janja (Clara Cleymans), and womanizing orderly Daniel (Benjamin Ramon). In addition, Michael has to deal with the fact that he has hemophobia, which makes him nauseous at the sight of blood.

With the plot taking place at a plastic surgery hospital, Yummy is a film that features a number of unique gore gags, include a “reverse liposuction” explosion or surgically enhanced appendages getting set on fire. This makes for a crude and bloody, yet enjoyable to watch zombie comedy and I also have to mention the very well done puppet “zombie lizard” that shows up at one point. However, I do have to note that I thought that the film goes maybe one step too far with the ending, which I thought was a little too dark for a film of this tone.