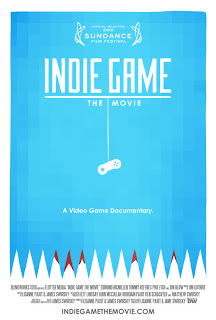 I finally managed to catch up with the film I most wanted to see at Hot Docs, but was sadly unable to.  Indie Game: The Movie is about the world of independent videogame designers; a sub-industry that as blossomed in the rise of digital distribution platforms, such as X-Box Live Arcade.

The film features three indie games: Braid, Super Meat Boy, and Fez.  Braid had the distinction of being one of the most successful indie games and was used as the example that the other developers strive towards.  Tracking the development of both Super Meat Boy and Fez makes up the bulk of the documentary, with each story having their own highs and lows.

Other than the videogame element, one thing that stuck out to me about the film was the fact that nearly every one of these indie game developers were a social outcast in someway (I even suspect that at least one of them had full-out Asperger’s Syndrome).  Developing these indie videogames (which requires a lot of time and work) essentially has taken over all these individual’s lives to the point that can’t see a life outside of videogame development (one of the developers even says that he would kill himself if wasn’t able to finish the game).  I was actually surprised at one point when it was revealed that one of the developers was married, since that very same individual said that he purposely avoids social interactions.  Go figure.

Overall, Indie Game: The Movie works on multiple levels.  On one hand it is an interesting look into the world of independent videogames and helps to support the long-running argument that videogames can be considered an artform in the same way that movies can.  On the other hand, it is an interesting sociopolitical commentary in how all these indie developers seem to dedicate their entire lives to these games to the point where they have all but nonexistent social lives.

I should also add that I now have a desire to play the games featured in this film, so it has done its job in that aspect.