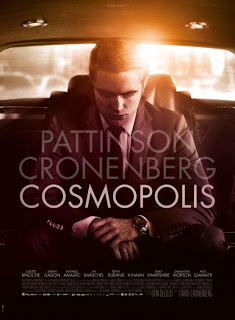 Outside of a New York City building (that looks remarkably like Toronto’s Union Station), 28-year-old billionaire Eric Packer (Robert Pattinson) decides that he wants to get a haircut on the other side of town. His bodyguard Torval (Kevin Durand, doing his best Christopher Walken impression) advises against this, because the visiting U.S. President will make traffic a nightmare.  Parker decides to go anyway and boards his limo for a day-long trek across town.

So begins David Cronenberg’s latest film Cosmopolis, which is based on the novel of the same name by Don DeLillo.  One thing that is sure going to annoy hardcore Cronenberg fans is that this is one talkative film.  Those expecting any of the elements Cronenberg is known for will be, for the most part, disappointed.  About 90% of the film involves Packer having extended conversations (mostly within his limo) with a rotating roster played by the likes of Jay Baruchel, Juliette Binoche, Sarah Gadon, Samantha Morton, and Paul Giamatti.

Casual viewers will likely find all this talk boring and indeed there were a few walkouts at the screening (though mostly by apparent theatre-hoppers that arrived late).  However, I was completely enthralled by the discussions.  The film features the recurring theme of the fall of capitalism and it gets to the point that this fall becomes physically represented by Packer.  Packer gets increasing disheveled over the course of the film (usually as a result of his various casual sexual encounters throughout the day) and, without spoiling too much about how the film turns out, he is complete mess by the end of the day.

I also have to say that I was pretty impressed with Robert Pattinson.  Cosmopolis is definitely the perfect film for him to shed his image from the Twilight films and he definitely ends up doing some unflattering things within the film.  I hope that he continues to take more challenging roles and doesn’t play-up too much the heartthrob image he gained over the last few years.

Overall, Cosmopolis will probably end up being one of the most polarizing films of Cronenberg’s career.  Whether or not one enjoys it depends and how accepting your are of a film that consists of mostly conversations in a limo.  I for one, loved it.