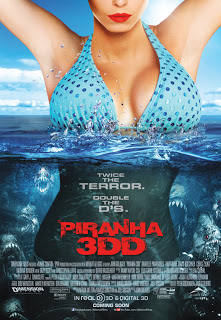 Two years ago we saw the release of the 3D remake of Piranha.  Back then I liked the film because it was exactly what I expected it to be – a fun and campy gorefest.

Piranha 3D was a bit of a surprise horror hit in 2010 and of course that means that they just had to make a sequel.  Probably the first sign that this was going to be a more lowbrow sequel was the decision to name the film Piranha 3DD, which places emphasis on the OTHER main element of the film (i.e. gratuitous nudity).

The basic plot outline of the film is pretty much identical to the previous film (except you sub in a waterpark for a beach), however it was devoid of any of the fun.  Gone is director Alexandre Aja and a cast that included the likes of Elizabeth Shue, Adam Scott, and Richard Dreyfuss.  Instead the film is directed by John Gulager (known for the horror film Feast) and has a much more B or C-level cast, including Danielle Panabaker, David Koechner, and Gary Busey.

While the previous film had something that resembled a story, this film came off as a cut and pasted mess with some pretty atrocious acting.  I at least hoped that the carnage would make up for any problems I had with the plot, but oddly the gore was really lacking when compared to the first film.  They seemed content to do much of the gore in the form of sick sight gags than anything that was truly horrifying.  The film featured a repeat of the previous film’s climactic attack sequence, but here it almost seemed like an afterthought.  The previous film went crazy with it’s gore (to the point that the water was completely red afterwards).  Here, I barley noticed a small pool of blood after everything was done with.

While they could not salvage my overall opinion of the film, there were some things that I liked.  Christopher Lloyd, Ving Rhames, and Paul Scheer return from the previous film and reminded me about how fun it was.  Lloyd’s role was nearly 100% identical to his role from the previous film (complete with an emergency phone call at the end), but he was still fun to watch.  Rhames and Scheer appeared together in a throwaway cameo and, while fun, it really seemed out of place from the rest of the film (especially since they did not explain how Scheer survived).

However, my biggest kudos for the film will having to go to the one and only David Hasselhoff! Out of everything that was wrong about the film, Hasselhoff was the only thing that they got right.  He has a big awesome moment in the film that just had me clapping with joy.  If only the rest of the film followed suit….

Overall, Piranha 3DD is a perfect example of a bad horror sequel that takes everything that made the previous film fun (minus Hasselhoff) and just drove it into the ground.

4 | DISAPPOINTED  (though Hasselhoff gets a 10)