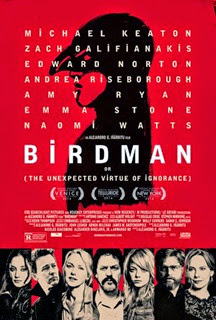 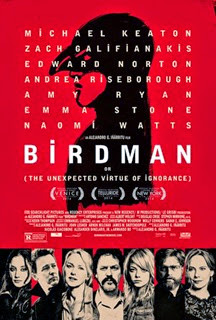 From filmmaker Alejandro González Iñárritu (Babel) comes this dark comedy about a past his prime actor trying to prove himself.  Riggan Thomson (Michael Keaton) is a former Hollywood movie star, who was famous two decades ago for playing a superhero named “Birdman.”  Riggan is trying to prove himself as a serious actor by directing and starring in a theatrical adaptation of Raymond Carver’s short story “What We Talk About When We Talk About Love,” which is produced by his friend and lawyer Jake (Zach Galifianakis) and co-stars self-absorbed Broadway actor Mike Shiner (Edward Norton) and first-time actress Lesley (Naomi Watts), with Riggan’s recovering drug addict of a daughter Sam (Emma Stone) acting as an assistant.  As the play goes through a disastrous series of previews leading to opening night, Riggan finds himself constantly taunted by his Birdman alter-ego. If someone’s famous for playing a costumed superhero, does that make them any less of an actor?  That is the question posed by Birdman or (The Unexpected Virtue of Ignorance), which takes a satirical look at the difference between the high art of live theatre and low art of Hollywood blockbusters.  Despite being a fictional story, Birdman is highly referential of the career of star Michael Keaton, who is best known to mainstream moviegoers for his role in Tim Burton’s Batman.  No matter how hard he tries to legitimize himself through his play, Riggan is cursed to always being known as the man who played Birdman.  It doesn’t help that the voice of Birdman is constantly nagging him in the head and telling Riggan to abandon the play and return to Hollywood. Even though the plot of Birdman takes place over the course of many days, the film is edited in such a way that the entire film looks like a single continuous take.  The film is quite seamless in its transitions, as the film switches focus among the half dozen or so central characters, following them around the single theatre location.  In fact, I noticed only one clear edit in the entire film, which comes towards the end. When it all comes down to it, Birdman is all about what it means to be an actor.  One of the key scenes of the film involves a conversation between Riggan and theatre critic Tabitha Dickinson (Lindsay Duncan), which really goes into the difference between Riggan’s status as a Hollywood celebrity and a true stage actor.  As it progresses, Birdman also features some increasingly surreal elements, which can either be taken literally or seen as a result of Riggan’s fracturing psyche. Overall, Birdman turned out to be a pretty great satire about the perception of celebrity and what it means to be seen as a serious actor.10 | LOVED IT