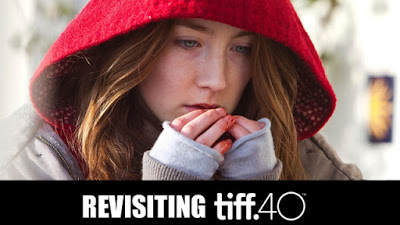 
The 2012 festival was another busy year for me, with seeing 25 films over the course of the festival. While it was great seeing so many films, this was also the year that I decided to reconsider some of the timeslots that I saw screenings in. By starting the day with a morning screening and ending with Midnight Madness, this was a year where I really started to experience some festival fatigue, with me retiring from morning screenings in 2013.

The film from the 2012 festival that I am revisiting is Neil Jordan’s vampire drama Byzantium. This film marked Jordon’s return to the vampire genre for the first time since 1994’s Interview with the Vampire. Like that film, Byzantium features a very romanticized version of vampirism. In fact, the film heavily departs from traditional vampire lore, particularly in how the vampires are without fangs, and instead puncture victims with an elongated thumbnail.

The film focuses on the female vampires of Clara (Gemma Arterton) and Eleanor (Saoirse Ronan), who tell others that they are sisters, even though they are in actuality mother and daughter. The film makes a heavy use of flashbacks to tell Clara’s story, in how she traveled to a top secret island to become a vampire and escape her life of prostitution. However, it turns out that females are forbidden by the brotherhood of vampires, who call themselves the “pointy fingers of justice,” which results in Clara and Eleanor constantly finding themselves on the run.

When I first saw Byzantium at TIFF, I was expecting a bit more of a horror film, so I ended up being a bit bored by the film’s heavy use of period flashbacks. Then there is Saoirse Ronan’s character, who is literally a young character with an old soul, who is repeatedly lamenting the burden of her immortality. However, she does find an unexpected connection through a man suffering from leukemia (Caleb Landry Jones), to whom she tells her life story.

While I will not say that I now fully like Byzantium, I did appreciate the film much more on this second viewing. One thing that cannot be denied is that the film is exquisitely shot, particularly the vampire island and its waterfall made of blood. Also, Saoirse Ronan is quite good in the film as Eleanor. I’ve been following the actress since I first saw her in Death Defying Acts at the festival in 2007 and she has become one of my favourite young actresses. I have also already talked a great deal about Gemma Arterton in my post about The Disappearance of Alice Creed.

While I’m not fully a fan of romanticized vampire stories, I will say that Byzantium is starting to grow on me.