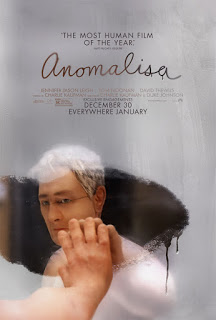 A lonely self-help author finds a connection with an anomaly of a woman in Anomalisa. Self help author Michael Stone (David Thewlis) has traveled to Cincinnati, Ohio to promote his latest book at a hotel customer service convention. However, Michael is an incredibly lonely man, who perceives everyone (Tom Noonan) as exactly the same. However, Michael comes across a shy girl named Lisa Hesselman (Jennifer Jason Leigh), whom he feels an inexplicable connection to.

Seven years after his previous film Synecdoche, New York, Charlie Kaufman, with co-director Duke Johnson, returns with a stop-motion animated drama about a lonely man, who is essentially having a mid-life crisis while on this business trip. Michael Stone feels like he is literally the only unique individual in the world, with practically everyone around him having the same droning persona. It is not until he hears a single female voice in the hallway of his hotel that Michael escapes from his funk and heads out to find this anomaly of an individual.  While Lisa turns out to be a very shy and not so extraordinary individual, Michael finds in her the connection he has been looking for.

There is a bit of an uncanny valley feeling generated while watching Anomalisa. While the puppets used for the film have a quite realistic appearance, it is still quite obvious that the film is spot motion, with the seams literally being visible. However, this being a Charlie Kaufman film, this “fake reality” is somewhat on purpose and Anomalisa even features a few fourth wall breaking moments. The story of the film is based on a “sound play” Kaufman wrote in 2005, with David Thewlis, Jennifer Jason Leigh, and Tom Noonan reprising their roles from the play.

The casting is probably the most odd aspect of Anomalisa, since other than the central two characters voiced by Thewlis and Leigh, practically every supporting character in the film (both male and female) is voiced by Tom Noonan. There ends up being a story reason for this casting, since Michael comes to believe that he and Lisa are the only unique individuals in the world.  In some ways, Anomalisa has a bit of a thematic relation to Charlie Kaufman’s earlier film Eternal Sunshine of the Spotless Mind, since both films deal in some way with finding the person that is right for you.

Despite being a stop motion film, Anomalisa is a very serious and adult story. There are many different ways that this film can be interpreted. On one hand, the film can be viewed at surface level about a lonely man entering into a mid-life crisis and having an affair with a younger woman. However, Anomalisa can also be viewed much deeper than that, especially when it comes to what exactly is going on in Michael’s head.

For better or for worse, Anomalisa is very much a film that fits right at home in Charlie Kaufman’s filmography. For more than fifteen years he has been one of the more interesting screenwriters/filmmakers and it will be interesting to see what he does next.