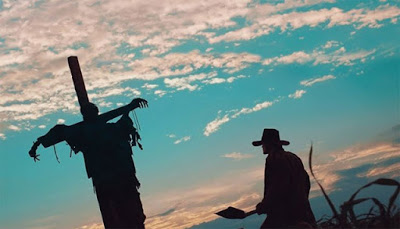 A gunslinger tries to save his wife in a post-apocalyptic wasteland in Night Cries. Joseph Morgan (Andrew Cymek) has been scowling the wasteland, fighting demons and psychopaths, trying to locate his wife Sarah (Brigitte Kingsley). However, not long after finding her, Joseph crosses paths with The Hat (Colin Mochrie), who has declared himself the warlord of this new land.

Night Cries is a film that combines a post-apocalyptic world with some western visuals. It probably wouldn’t be too far off to compare this film to Stephen King’s Dark Tower series, even though there is a very interesting twist to this world Joseph Morgan finds himself in. There are some very fantastical elements to this story. the most notable of which being the fact that Joseph’s sidekick is a sarcastic talking doll named Caitlyn (Aislinn Paul), who actually turns out to be one of the more memorable characters of the film.

While Night Cries is probably best described as a romantic fantasy drama, the film doe feature some pretty well done creature effects for the demons Joseph fights against. However, the film also features the use of some low-grade CGI, which comes off as very cartooney. Colin Mochrie hams it up big time as the top hat wearing lead antagonist, with the character being both funny and sinister. That all said, Night Cries is far from a perfect film, with there being some scenes with non-so-great dialogue and some lingering plot holes, such as the repeated appearances of a ghostly lady in grey. Altogether, Night Cries is an interesting post-apocalyptic fantasy.