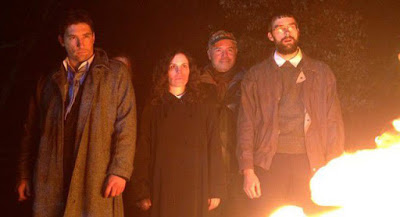 A counselor at an abortion clinic is tormented by a group of religious zealots in She Who Must Burn. Angela (Sarah Smyth) is a counselor at a planned parenthood clinic, who refuses to leave after the Government pulls out. Despite receiving support from her police officer boyfriend Mac (Andrew Moxham), Angela’s stance creates a very tense situation with the right-wing religious fanatics in the town, including local paster Jeremiah Baarker (Shane Twerdun), his sister Rebecca (Missy Cross), and her husband Caleb (Andrew Dunbar). Blaming Angela for a plague of miscarriages, the Baarkers come to the conclusion that she must be burned.

Directed by master provocateur Larry Kent, She Who Must Burn has turned into a very timely film, in light of the recent shootings in Colorado. She Who Must Burn is a different type of horror film, in that it doesn’t feature any ghosts or monsters, just human beings and the terrible things that they are capable of, especially in the name of God. While I consider myself a religious person, I hold absolutely no sympathy towards fundamentalists and zealots, who use religious beliefs as an excuse to commit horrible and evil acts. She Who Must Burn is a scary movie, simply because it involves events that can and have actually occur.

As a film that shows the horrors of religious zealotry, She Who Must Burn is quite excellent. Jeremiah Baarker’s calm, yet sinister, demeanor is contrasted by Rebecca’s more outward zealotry, with her being the most psychotic of the group. There is a constant tension throughout the film, as a storm comes both figuratively and literally. She Who Must Burn is not at all a pleasant viewing experience, and is outright disturbing in parts, however it is also a very important film that illustrates the evils that come with religious zealotry.