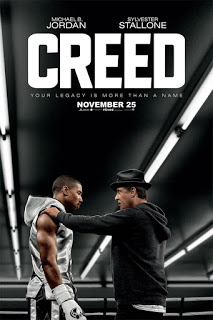 The son of Apollo Creed seeks out Rocky Balboa as his trainer in Creed. Adonis Johnson (Michael B. Jordan) is the illegitimate son of late boxer Apollo Creed, who had a very troubled life, before being taken in by Creed’s widow Mary Anne (Phylicia Rashad). Adonis decides to follow his father’s footsteps into boxing, but wants to do so without the baggage of his father’s name.  Adonis travels to Philadelphia and looks up Apollo’s best friend and retired boxer Rocky Balboa (Sylvester Stallone) and asks him to be his trainer.

Directed by Ryan Coogler (Fruitvale Station), Creed is a film that works as both a sequel to the nearly forty year old Rocky series, while also working as a spin-off, introducing a new underdog boxer to the mix. Probably the most interesting aspect of this series is now it essentially follows Rocky Balboa from the start of his boxing career right down to his new role as a trainer for young upstart Adonis Johnson.  Adonis refuses to use his father’s name to advance his boxing career, however is forced to do so when he is challenged by British champion Ricky Conlan (Tony Bellew).

Like many films in this series, Creed is bit more about the drama than the actual boxing. While Adonis is setting out to create his own legacy, Rocky Balboa is all about trying to preserve his. Things have gone a bit downhill for Rocky in the decade since his comeback in Rocky Balboa, with brother-in-law Paulie passing away and his son Robert having moved away to Vancouver. With there being no one left in his life, the opportunity to train Adonis gives Rocky something to live for. Of course, the film maybe tries a bit too hard to amp up the drama, including a heart-string tugging plot development.

Then of course there’s the actual boxing in the film. There is actually one bout early on in the film, which is impressive for the fact that it is portrayed in entirely one take. The main bout in the film seems a little rushed in its development, with Ricky Conlan literally coming out of nowhere to challenge Adonis, despite the fact that they have no prior history. However, the actual bout is still exciting to watch, even though the result of which might not be all that surprising to those familiar with the Rocky series.

In the end, Creed did a good job of continuing a series, which was thought to have concluded a decade ago. However, the final film is still not quite at the same level as Rocky.