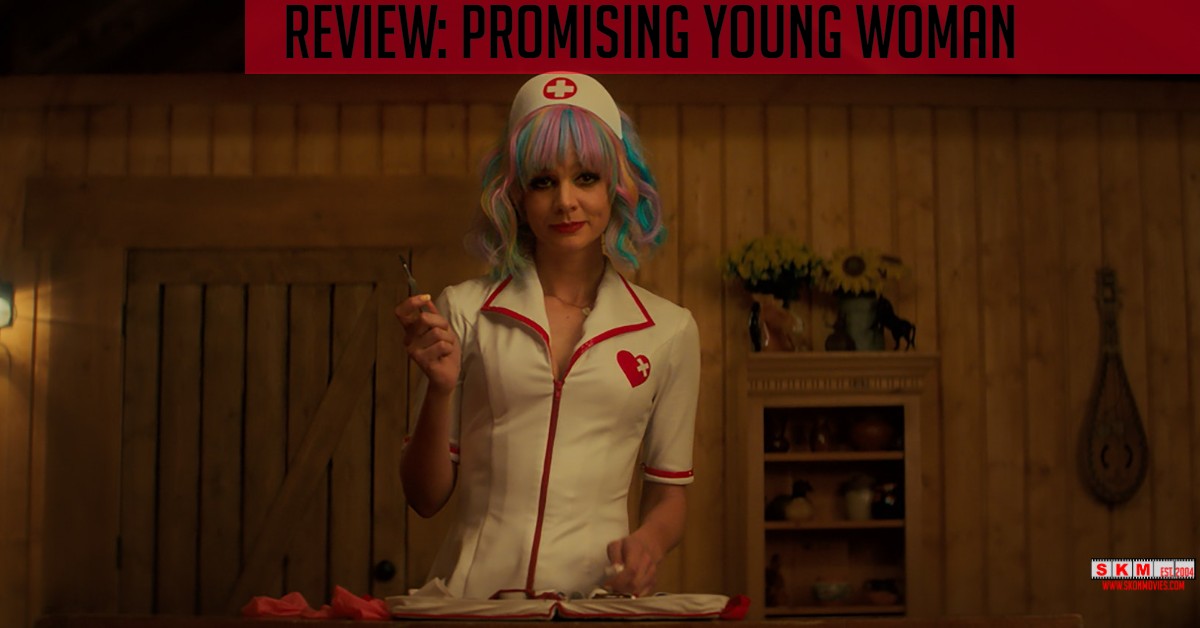 A woman seeks vengeance against predatory men in Promising Young Woman. Cassie Thomas (Carey Mulligan) is a 30-year-old med school dropout, who still lives at home with her parents and works in a coffee shop. At night, Cassie makes it a habit to go to clubs and confront the men who try to take advantage of her, as a form of vengeance for a horrible act that happened to her best friend many years before. Things begin to look up in Cassie’s personal life when she begins dating her old classmate Ryan Cooper (Bo Burnham). However, it is through Ryan that Cassie learns that the perpetrator of the previous incident is about to get married, which ends up sending Cassie’s thirst for vengeance into overdrive.

Promising Young Woman is the feature film debut for the actress turned writer-director Emerald Fennell, which is a very satirical twist on the typical revenge narrative. The film introduces us to the protagonist of Cassie Thomas, played by Carey Mulligan, as she goes through her nightly scheme of pretending to be pass-out drunk in a club, with the scenario always ending with a seemingly nice guy checking to see if she is okay, before proceeding to try and take advantage of her when he gets Cassie back to his apartment. This all stems back to an incident nearly a decade previous, where Cassie’s best friend Nina was sexually assaulted by a group of jocks, the aftermath of which lead to her suicide. When she finds out that the perpetrator Al Monroe (Chris Lowell) is back in town to get married, Cassie sets in place a multi-step revenge plan that includes confronting her old victim-blaming friend Madison McPhee (Alison Brie), dismissive Dean Elizabeth Walker (Connie Britton), and former defence attorney Jordan Green (Alfred Molina).

Promising Young Woman is not the first film to provide social commentary about rape culture and the victim-blaming that surrounds it, but writer/director Emerald Fennell makes sure that the focus is more on Cassie’s desire for revenge than the act itself, which by the start of the film is nearly a decade in the past. While others may have forgotten this sexual assault or used the excuse “we were kids,” it is still something that has remained at the forefront of Cassie’s mind, to the point that she has not been able to move on with her life, much to the concern of her parents Stanley (Clancy Brown) and Susan (Jennifer Coolidge).

Promising Young Woman contrasts Cassie’s desire for revenge with her budding romance with Ryan, which includes an admittedly quite tacky montage set to Paris Hilton’s 2006 one-hit-wonder “Stars Are Blind.” However, this element of the film actually makes the final act of Promising Young Woman, as Cassie goes through with the final phase of her revenge plan, to incredibly devastating results.

More than a decade after she received an Oscar nomination for her breakthrough role in 2009’s An Education, Carey Mulligan’s lead performance in Promising Young Woman is again getting her awards attention. Indeed, it can be said that Promising Young Woman is a film that is built nearly entirely on Mulligan’s performance, which is always sympathetic, even though she ends up doing some acts that are almost downright cruel during her search for revenge.

Altogether, it can most definitely be said that Promising Young Woman is a film that will stick with you long after the final credits roll.

Promising Young Woman is now playing in select theatres and is available on Premium VOD on Friday, January 15, 2021